Back to All Projects

Participants of medical sleep research studies no longer want to input data on paper because they find it cumbersome.

My first step in any project is to identify which users to target. Since most sleep study participants have some form of sleeping disorder, the answer was to start with that type of user (with a "healthy" user as a baseline) and identify personas through user interviews conducted with members of the research staff to inform future decisions.

Users were finding paper data sheets cumbersome and old-fashioned. What other sleep or health apps were they familiar with? Time for me to do some research.

Now that I was armed with data, it was time to whiteboard and paper sketch to throw around ideas to wireframe for testing (I find it most helpful if you have a stakeholder or two with you, problem solving is rarely a solitary activity).

Whiteboarding led to a need to more accurately depict flows the user would need to take when using the potential solution. 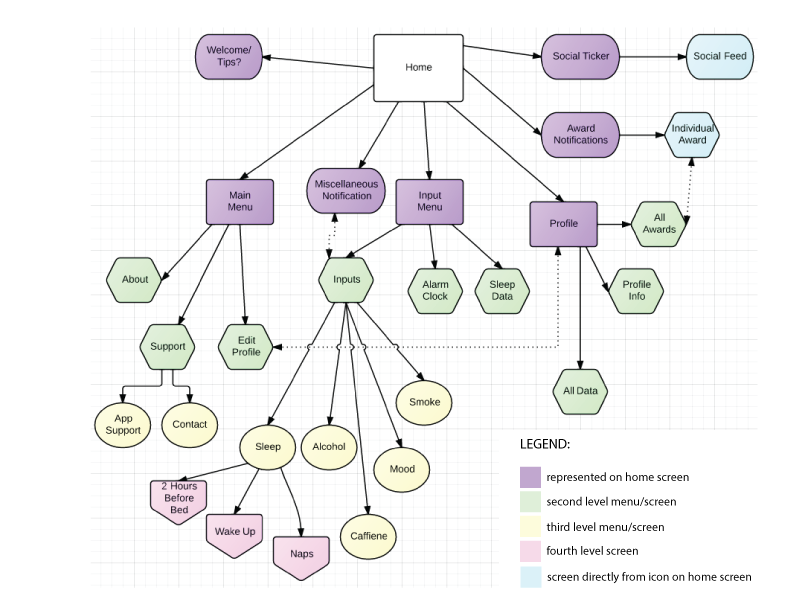 Users were tested by asking them to complete four simple tasks on wireframes printed out on physical paper. After they were finished, they were asked to complete a simple survey to determine the "product's" SUS (System Usability Scale) Score (it averaged at 67, I'll do this same exercise at the end to see if iterations improved the user experience).

Here are three big problems from the user interviews and user testing and how I set out to solve them:

Too Much Daily Repetition

Users would have to enter things like tobacco usage or eating habits by flipping to the right piece of paper in a massive binder. The solution here made that interaction a simple slider and ensured users could complete data entry with the quickest input type in the system.

Without any insight to the data being collected, users didn't have an incentive to complete daily data entry. By utilizing metrics and various tools to let the users see their progress, it would give the user more reasons to open the application to fill out their daily data.

Some sleep studies had regular support group meetings but they had no way of communicating with other members of the study otherwise. By allowing members to gain badges for certain accomplishments to share with others, they saw the progress of their peers and could interact with other users at will.

With some initial testing complete done through paper, it was time to create a working prototype for user testing that would mirror an actual application.

With a working prototype in tow, the next step was to move onto formal user testing. This was done with the assistance of Morae where users were recorded while a moderator asked them to complete specific tasks modeled after a script I created to enforce consistency without introducing my bias as the designer of the solution. After the test was complete, users were asked to fill out a survey which gave the final SUS Score to see if the experience had improved.

Although this project never made it past the protoype phase, following a complete UX process allowed data to drive decisions while also finding ways to delight users while completing repetitive tasks. The SUS Score improved from a 67 to a 79 which is a healthy improvement. It proves iteration can consistenty improve the user experience over time, even if you're not dealing with a fully fleshed out product.